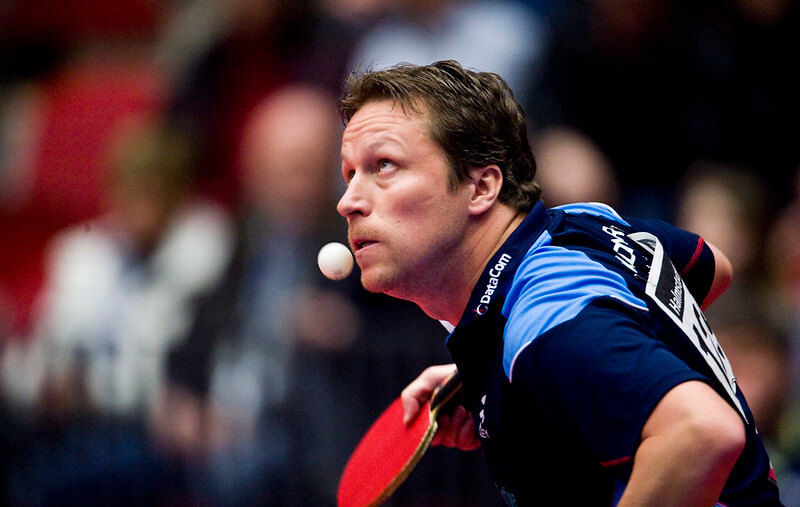 The star is born

The best-known table tennis player, Jan Ove Waldner was born in Stockholm on 3 October 1965. He is responsible for many of the greatest victories in the Swedish sporting history, ranging from winning the Olympic Games in Barcelona (1992) to the world cup triumph in Csiba city 1990.

His achievements secured Sweden to become one of the leading table tennis nations. Some people call him a magician, while others say he’s the greatest living table tennis legend. One thing is sure, J-O Waldner deserved his fame and popularity, he’s truly a star in his category.

In this post, we’ll go through his amazing career and see how he got involved in table tennis. Besides, we’ll try to detect the turning points in his sport life, list his most remarkable achievements and try to reveal the secret of his unique playing style and smooth movements.

Setting up the goal

The 1970’s was an ideal era in Sweden for those who wanted to become professionals in table tennis. Waldner was six years old when the country celebrated its first singles world champion, Stellan Bengtsson. Two years passed by, when in 1973, Sweden won the team World Championship gold medal. Afterward, the sport gained huge popularity, therefore more clubs were offering training opportunities, while unlimited competitions were organized at the weekends.

The young Waldner lived in the suburbs of Stockholm, so it was logical to begin his career at the Stockholm Spårvägar club, which was one of the well-known and most promising clubs in Sweden. Already after some tough practices J-O defined his goal: becoming the best Swedish player, which also meant, being among the top 10 players in the world.The circumstances were all set, such players as Mikael Appelgren, Ulf Thorsell and Roger Lagerfeldt supported him along his way. They trained all day for years which undoubtedly contributed to later successes.

The early signs of a genius

When the kid Waldner was seven, he could already return 60-70 backhands without missing the ball. Two years later, he already had a decent forehand loop, which was quite unique compared to his club mates. In general, table tennis allows the players to do countless tricks with the ball, which quickly became Waldner’s favorite activity. He liked to make a fool of his opponents, giving incredible and unexpected spins to the ball. J-O had an organic feeling, while he loved discovering new shots and developed them until perfection. Losing was not in his dictionary, even though that’s what led him to improve his style even further. Talent and persistence were indeed significant attributes, however – according to his memoir – the safe family background was also among the crucial factors that made him world number one. Security and support from his parents and brother gave him courage and power at the table.

The turning point in China

While still improving his game, the young Waldner – along with other Swedish national players – flought to a training camp held in China. The trip was a turning point in his career and changed his attitude towards the sport. He hadn’t experienced such a thing earlier in Europe. The dedication and solidarity of the Chinese players highly impressed and gave him a solid boost to achieve his goals.

Funny enough, later on he became one the most popular and admired ping pong players in China. Some rumor says, there was a time when he was even more recognized in China then the President of the United States, Bill Clinton itself. No surprise, he was also nicknamed by the Chinese as “the evergreen tree” in Mandarin.

Waldner read the game, meaning that he absolutely controlled each rally. From an outsider it might seem there’s nothing that could surprise him during the match. His basics were extremely strong. Although, some people may argue that every professional player has strong basics; Waldner always had much sophisticated strokes. His tactical awareness was also brilliant. A table tennis player should know or at least reckon the kind of return he would receive after a serve. To further enhance this ability, he always seemed to anticipate the opponent’s movement effortlessly. As in tennis, a good serve can win the game, therefore a whole match. Waldner had a wide range of serves, pushing constant pressure on his opponents. After the opening, he could control, then finish the rally most of the time.

J-O’s forehand and backhand were elegant, smooth and effective. The touch of the ball was always perfect, he could add as many spins to the ball as he intended. Due to the hard work and conscious practice, he also developed great footwork. Above all, his uniqueness lied in his spectacular saves, sometimes 20m from the tables. Even though he was standing with his back to the table, he played it on and won the rally.

The grand slam and other achievements

Probably, most of the athletes would have agreed to have such an outstanding career that Waldner’s had. In table tennis, he’s among the five men players who managed to achieve the grand slam (in 1992), which includes the World Cup, World Championship and Olympic Games gold medals in singles.

He’s also one of the exceptional players who competed at the first five Olympic Games since table tennis was introduced at the Games in 1988.

It’s fair to say, he won every existing competition, but most likely his greatest victory is the Olympics singles gold medal in 1992, Barcelona. After winning 6 matches in a row, he beat Gatien, the left-handed Frenchman in the final. Even the Swedish King was watching and cheering live to Waldner. After all, the Swede won a confident victory with a 3:0 end result.

The end of his professional career

11 February, 2016 is a mix-hearted day for the table tennis world, when Waldner decided to “hang up his paddle” after his last game in the Swedish first league Ängby/Spårvägen. After the game was over, he officially announced his retirement as a professional.

He’s still around in table tennis, but doesn’t practise much, after all he’s spent quite enough time behind the table. During his fruitful and inimitable career he got many nicknames, but probably “the Mozart of table tennis” suits him the best, since like Mozart, he was also very much a maestro in his own right!

What about the other great swedish table tennis players?

We shouldn’t forget that the Swedes have been on of the leading nations in ping pong. They’ve managed to raise spectecular players who achieved breathtaking results. Besides Waldner, let’s see some of the biggest names!

The right-handed genius was not only a good friend of Waldner, but a double partner as well as his lifelong opponent. In 1991, Persson greatest dream came true when he beat his Swedes rival in the World Championship singles final. Two years earlier in Dortmund however, Persson couldn’t be that happy, when Waldner overcame him in 5 sets.

The two legends met several times during their career. Luckily if I may, both of them stepped on the top of the podium, sometimes by helping, sometimes by hindering each other. In total, Persson owns five World Championship and no less then ten European Championhips titles.

Since 2019, he’s appointed to be the coach of the Swedish men’s team. With quite a lot of success, so far.

One of the most remarkable names in the Swedish table tennis history as he became the first who won gold medal in the singles World Championship in 1971, Nagoya.

His small stature was ideal at that time, which was supported by his insane left-handed topspins. Bengtsson managed to keep extremely relaxed even in the most thrilling situations. Not suprisingly all the Chinese players were scared of him.

Mattias is the member of the recent Swedish national team. Many people love him due to his uncommon playing style and modest behaviour.

In 2019, he’s achieved his biggest success so far by getting into the World Championship final in Budapest. It also meant that 22 years passed by since a Swedish could fight for a gold medal.

On the main draw, he beat Szudi, Gardos, Apolonia, Lee, Gauzy and An. The last player who waited him was Ma Long, who after all overcame Mattias in 5 though sets.

The 10+1 best table tennis players of all time

Everyone’s interested in who the top table tennis players might be. Here we’ll gather the achievements of the players while also consider their popularity.

Jan Ove Waldner is one of the greatest names in table tennis. Learn how he improved his game and what led him to become the world number one!

The History and Results of Table Tennis at the Olympic Games

Interested in the history and results of table tennis at the Olympics? Read about it here, including the most thrilling moments and predictions for the next Game.